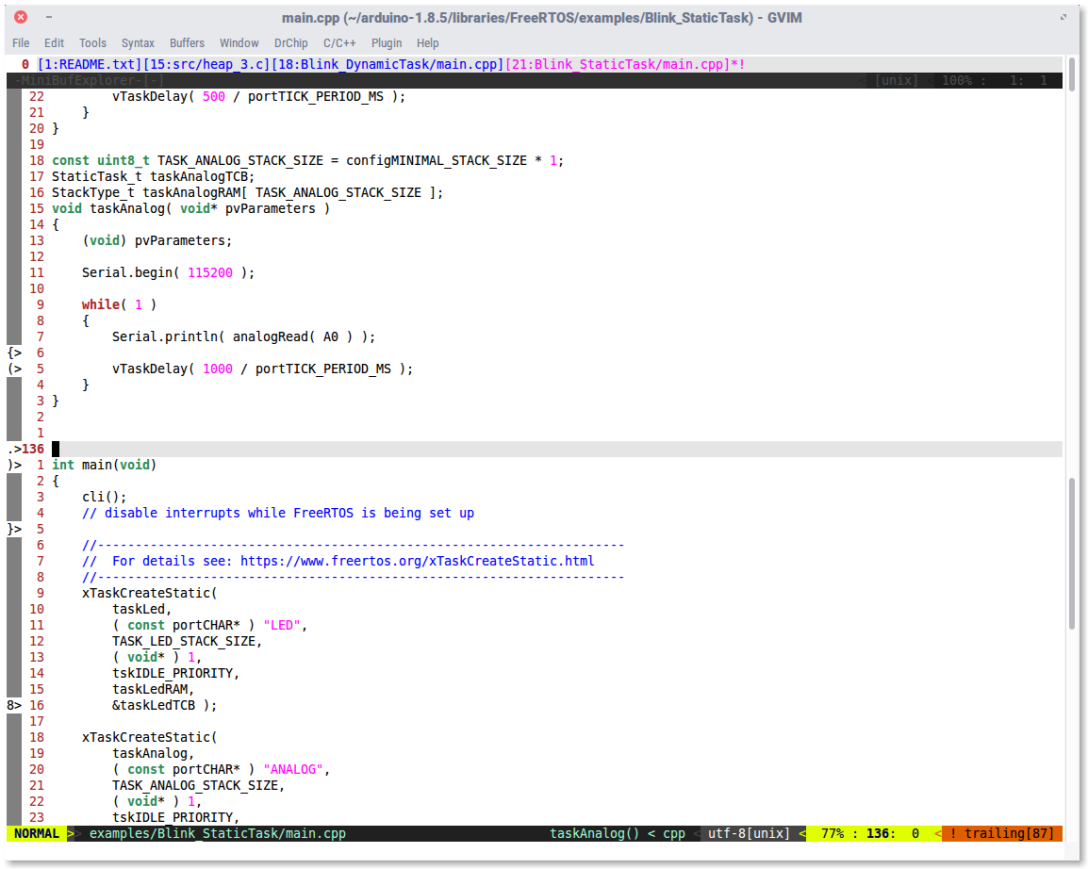 It’s ready the bundle in which you can program your Arduino apps using the FreeRTOS kernel. You can download it from

The Molcajete project by Xavier R

The aim of this project is to program Arduino apps using the world’s most downloaded real time kernel, FreeRTOS, in a terminal through Arduino-mk makefile.

In fact, this project is kind of a FreeRTOS port for the ATMEGA328 chip so that it can be used in the Arduino platform. The client of this project MUST provide the several hooks that FreeRTOS needs to run. It’s assumed that the client has knowledged of what FreeRTOS is about, and in general, what a kernel is, and why and how it’s used.

Two examples are provided: The classical one that implements two tasks in a dynamic fashion in order to test the system. The other example does the same but with static tasks.

This port uses the standard malloc and free implementations for AVR when using dynamic tasks. For reliable embedded systems it’s recommended not to abuse in the creation and deletion of tasks in the heap. If the client chooses this way it’s recommended to create all tasks at once at the global space and to avoid any task deletion. Even better if static tasks are used as they are already enabled in the kernel (since FreeRTOS 9.0).

The system tick is fixed at 1 millisecond after the AVR’s T0 timer. Tickless and/or low-power modes have not been tested yet.

I don’t provide any sketches. Everything I do I do it in a terminal. But you can contribute with some!

For now this project only works on 64 bits Linux boxes. Later I’ll try to create a patch file so you can apply it to your already Arduino installation.

Two files need to be edited in order to configure each project:

The stack size assigned to each task depends on many factors. FreeRTOS includes some schemes so that the client can choose the number that fits the most each project’s tasks. Such a number can also be chosen by heart, provided a good understanding of the task’s job.

As mentioned earlier, the RAM should be asked for and given globally at the very start of the application. This is also true for static tasks. If dynamic tasks are used, then it’s recommended not to delete them; the heap might fragment and such situation isn’t good for reliable embedded systems.

Priority levels in FreeRTOS are implemented using a linked list. The more the priority levels, the more RAM it uses and more time is spent looking for the next task. Some projects use one priority level per task, while others share a priority level among several tasks. It depends totally on the project requirements.

I’ve written an article on how three priority levels fulfill the needs for a small systems using event-driven programming. The article can be reached at: https://bit.ly/2qoE2Kn

Some hook functions might be required for each project. The client MUST provide them. The number of hook functions, if some, depends on the FreeRTOS configuration.

I modified some files so that FreeRTOS can work along Arduino. If you are interested in study them, these are the files:

I’ve modified a little bit the optiboot bootloader, and this change is included in the bundle. If you don’t use it, then you have nothing to worry about. If you’re planning to burn the bootloader into your chips, you might want to check my modifications.

Each entity in this project might have its own licensing scheme. For details visit:

All contributions are welcome: examples, sketches, testing in boards other than UNO or Leonardo, testing in OSs other than Linux, etc. I’m NOT asking for money. I’ve done this little contribution due to my love for embedded systems and my beliefs on the open source and open hardware movement.

You can reach me at fjrg76 at hotmail dot com and ingenieria at fjrg76 dot com.